30 Years of Accessible Educational Resources at the Open University 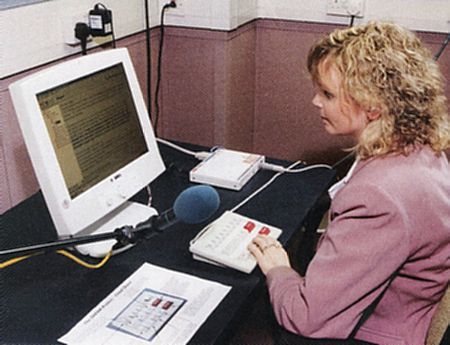 30 Years of Accessible Educational Resources at the Open University

This year marks the 50th anniversary of the Open University, delivering flexible, innovative teaching and world-leading research in the United Kingdom and in 157 countries worldwide. It’s also the 30th anniversary of the department which creates accessible learning resources, and in the last 30 years that process has evolved significantly.

Audio for students with disabilities was originally recorded and distributed on audio cassettes. Initially, volunteer readers would use cassette machines in their own homes, with all the inherent problems of variable recording conditions and external noise. In 1989, the Open University, in collaboration with the Royal National Institute for the Blind (RNIB), opened the C.J. Smith Audio Recording Centre (on the main OU Campus), which allowed audio to be recorded in a much more controlled environment. Tone indexing was added to aid navigation by chapter, section, sub-section when the cassette was spooled at high speed. However, even with the tones, navigating content on cassettes could be frustrating. A large book might need to be presented as twenty individual cassettes and even when the correct cassette was selected, getting to the required section of the document could be a very time-consuming process.

The Open University started to provide digital audio to students with disabilities in 1998, with a system developed in house called Readout. A software package called Dream allowed audio to be recorded onto a computer. When the recording was completed, a final software package called “Readout” was created which could be despatched to students. The Readout system provided higher quality digital audio recording and allowed students to navigate directly to individual headings or pages in a document. However, the Dream-Readout system had a number of limitations. Recordings could only be created from properly formatted .html files which weren’t always available at that time, consequently it wasn’t possible to create Readout packages of all course material. The system also wasn’t capable of handling images, so the student using Readout would not be able to see pictures, diagrams, graphs etc., that were in the original document. The finished Readout package sent to the student could only be played from a CD-ROM (it couldn’t be copied) and the audio could only be played in the Readout software. Consequently, for all Readout packages, an audio cassette was simultaneously created to allow students who were unable to use the software to still be able to listen to the audio.

In 2008, the Audio Recording Centre began to create audio versions of Open University module material in the DAISY format, allowing additional features such as a navigational structure that makes it easy to move or skip to different parts of the document. The DAISY Talking Books offered the flexibility to be played on computers using specialist software packages, on bespoke mobile DAISY Players, or the audio could simply be played in standard .mp3 players.

The DAISY system is highly flexible and continues to allow Open University course materials to be created in a number of ways. The Open University’s first DAISY Talking Books were recorded with volunteers reading from the actual paper document and the headings and page numbers of the document were navigable. The actual text associated with the document was not visible on the computer screen.  This type of “audio only” DAISY Talking Book is now only used for recording examinations, where electronic versions of the text are not available.

The majority of DAISY Talking Books created now have all of the text, pictures, tables etc., associated with the source material displayed on the screen and the volunteer reads the text directly from the screen. Documents in PDF, EPUB or Word format are sourced from the module websites and converted into a correctly formatted HTML file which is used to set up a recording project using Dolphin Publisher software.

In addition to being able to record human readers, the Dolphin Publisher software can also generate synthetic speech. This is an extremely useful option for speeding up the production of DAISY Talking Books. Entire documents can be created using synthetic voice, or “hybrid” versions can be created using a mixture of human voice and synthetic voice. However, synthetic voice can currently only be used for straightforward text. It is very difficult to use with texts that contain scientific terms and notation and is not used at all for anything but the most basic of mathematical texts. While synthetic voice is an extremely useful tool to speed up the production of audio versions of Open University course material, the overwhelming feedback from students is that their preference would always be for a human voice.

Audio was originally delivered to students on audiocassette, which could entail literally dozens of cassettes for a single book being despatched by post. This transitioned to CD-ROMs for, initially the ReadOut system, then DAISY Talking Books. However, only one DAISY Talking Book could be copied onto a CD-ROM. Consequently, at one point up to 60,000 CD-ROMs were being produced and despatched to students each year. Subsequently, the number of discs was reduced to around 6000, when module material was despatched on DVD-ROMs. This allowed an entire module with multiple DAISY Talking Books to be distributed using a single disc.

A total of 86 volunteer readers contribute to the recordings, producing 170 hours of reading a month on average, or 2,044 hours per year. Around 800 new DAISY Talking Books are produced each year, around a third of which are produced by human readers and two thirds using synthetic speech.

DAISY Talking Books will continue to be the default audio format for the immediate future, however EPUB formats are now becoming available which will offer the same features as DAISY Talking Books. These EPUB formats will be more “mainstream” meaning that far more material will be accessible than is currently available in the DAISY format and players such as Dolphin’s EasyReader will be capable of playing not just material specially created by the Audio Recording Centre, but will be able to play material that has not gone through special processing and formatting.