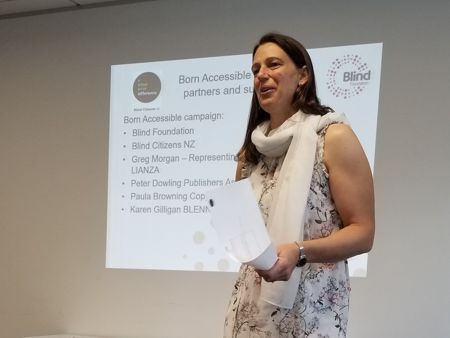 For the past 12 months in New Zealand, a core group of ‘Born Accessible’ key leads have been working towards the goal of improving access to e-books for people with a print disability so they can more easily participate in reading, both for pleasure and in formal education. Key leads come from Blind Foundation, Blind Citizens NZ, and Auckland Libraries with support from Blind and Low Vision Education Network NZ, Publishers Association NZ and Copyright New Zealand.

We are undertaking a two-pronged approach of:

On 26 June, we held a Publishers Workshop in Auckland to introduce and outline our campaign to them. There were over 20 attendees, mainly from the publishing industry but also a few authors. As well as this a few more attendees joined remotely over Zoom video conferencing from other parts of the country.

We had five speakers:

Geraldine Lewis, Library and Studios Manager at the Blind Foundation

I spoke about the worldwide picture; outlining the work other countries are doing in this area. In particular, I outlined:

I outlined exactly what we are asking for from Government. We have asked Minister Martin to make all New Zealand digital content available to children in schools in a ‘Born Accessible’ format, namely EPUB3. We also requested that devices required by these students to read digital files such as braille readers, support this content.

While some subjects are relevant to any publishing or document creation software, Adobe have included some unique accessibility features in InDesign. For example, using image XMP data for alternate text, creating an automated table of contents and export tagging paragraph styles.

To finish off, Tom demonstrated the Ace by DAISY accessibility checking tool as a plugin for Sigil, to show its effectiveness in helping fix accessibility issues with EPUB files.

He said it was extremely important to reassure publishers that this was the start of a conversation that incorporates them.

The purpose of Joshua’s presentation was to provide publishers and the Publishers Association NZ with an end user perspective as to why receiving EPUB3 formatted material would be beneficial to people with print disabilities.

Accessible EPUB3 publications enable users to access the content in a timely fashion, and in the method they need (with eyes, ears or fingers). The additional functionality associated with an EPUB3 title would also be welcomed in most academic circles.

Educational content would benefit most from EPUB3 as it facilitates a more user-focused experience.

Content that is heavily technical (such as graphs, schematics, diagrams and technical documentation) would be readily accessible which is important for academic pursuit in technical fields. The content would also be more engaging for users with print disabilities, as they would not have to go to extra lengths to access the material.

Such persons currently have to use unconventional methods, as they may need the information right ‘there and then’.

To finish off, Joshua emphasized that he thought EPUB3 Audio will see little change unless a universal standard is decided upon regarding audio file format.

Speakers from the publishing industry

We then heard from three speakers from the Publishing and Design Industry. When I was organising this meeting with the Publishers Association NZ and Copyright NZ, they had requested this as publishers would want to hear from members of their industry currently working with EPUB.

The three speakers from the publishing and design industry were:

A major concern raised was the fear that sending out digital files will increase illegal copying of their work, especially at a time when changes to the NZ Copyright Act are currently before Parliament. They are worried that the latter will make it easier for unauthorised users to copy their work and ultimately reduce publisher’s revenue. The other point of concern was that it would be difficult to protect these documents once they were out in the public domain.

The final part of the workshop was a discussion from the floor. The issues raised by the Craig Wilson, Craig Violich and Kevin Chapman above were reiterated by the attendees.

In addition, publishers spoke about the technical difficulty of creating EPUB3 files.

For this to work, we need Government support. If Government agreed that schools acquired accessible digital publications directly from publishers or authorised entities in the first instance then publishers would be paid to create this work. This would also mean schools would have ‘born accessible’ material from the start, eliminating the need for it to be made accessible later.

‘Born accessible’ publishing is actually a solution to their concern of mass illegal copying of their publications, because if it were created in this format from the beginning then there is no need to copy it to make it accessible and the Blind Foundation is there to work with New Zealand publishers in the creation of EPUB3.

We agreed to start a monthly newsletter that would go out to publishers updating them on work that is underway both here and internationally in this area.

The Publishers Association NZ reiterated their support for born accessible publishing. They said they would like a similar workshop to be held in another main centre in the near future.

We still have a long way to go in this campaign. We have to not only get the relevant MP’s support but also concrete plans in place for how to make this a reality in schools and educational establishments.

We also have to support publishers in their journeys to creating their material in accessible formats.

However, it was positive to see that despite the issues and concerns raised there was a willingness on behalf of publishers to get behind this campaign. It was heartening to see that there is the desire to change for the greater good and to have their support, because without it this change will not happen.

Creating a framework to ensure born accessible publications are available for the people who need them throughout New Zealand will take time, but having taken the first steps in this journey we are optimistic that our goal is achievable and will ultimately prove to be beneficial to everyone involved.